A newly released state geologist report defining Rockville’s rockfall hazards puts half my house in the High Danger Zone and half in the No Danger Zone, meaning, I suppose, I can spend half the night sleeping in peace and half lying awake contemplating my home’s current market value. Or, since the line puts the kitchen and office in the Danger Zone, perhaps it means I can sleep soundly, but cooking or working is out of the question, which, come to think of it, seems small price to pay for my personal safety.

While the 2001 rockfall nearly killed our friend Jack, the 2002 boulder landed on the highway, and the 2007 fall destroyed a newly built fence–in southern Utah, hardly worth sniffing at–the 2010 rockfall got our attention–anomaly it seemed at the time. That rockfall hit the house across the street from mine, destroyed four outbuildings, an SUV, a full-size pickup, and somehow managed to miss the barn in which my horses stood, though the barn was directly below the fall. The horses spent the next three weeks with their butts pressed against the highway fence staring at the cliff. To this day, Mr. Baby will not willingly pass a sandstone boulder no matter how many times I reassure him it will not jump up and get him. He has never forgotten. Neither have the two woman living in the house at the time. Below are images of the 2010 Rockfall I took when I walked across the street that morning to feed the horses. Click on the image to enlarge and read caption.

A small barn destroyed by the 2010 rockfall and the equally small boulders that did the job. My unharmed horse barn to the left. 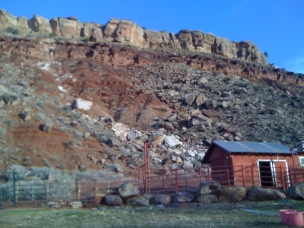 The 2010 Rockfall originated in a house-sized boulder that tipped from its cliff-edge perch, and shattered on its downhill tumble.

The 2010 Rockfall: In the porch door and out the window.

The 2010 Rockfall: Leave the window open–and wall. Note the boulder on left, stopped only by the engine block of the car parked there.

The 2010 Rockfall: another building gone.

What follows is the Geologist’s Report in it’s entirety, including a photo taken by a passing motorist of the redrock fog I described in my 2013 Solstice Letter and tribute to Maureen and Jeff (to be posted on this blog soon) which I did not have the presence of mind to take myself.