Cheatgrass could vie for the title of the most successful invasive species in North America. The weed lives in every state, and is the dominant plant on more than 154,000 square miles of the West, by one estimate. When it turns green in the spring, “you can actually see it from space,” said Bethany Bradley, an assistant professor at the University of Massachusetts, Amherst, who studies biogeography, the spatial distribution of species.

The sins of cheatgrass are many. Its tenacious seeds lodge in the eyes and gums of livestock (not to mention the ears of pets and the socks of hikers). Even a moderate infestation in a wheat field can reduce yields by up to half.

Its profusion is a big reason today’s Western fires burn more land, more frequently and with more ferocity than in the past, scientists say. Unlike well-spaced native bunchgrasses, cheatgrass — its scientific name is Bromus tectorum, or downy brome — crowds tightly together and then dies early each summer to form dense mats of tinder.

After fires, cheatgrass thrives even as native flora struggle to return.

After more than a half-century of largely failed efforts to thwart the Sherman’s march of cheatgrass, a researcher may have a powerful new weapon against it.

Ann Kennedy, a soil scientist with the Agricultural Research Service of the United States Department of Agriculture, has discovered naturally occurring soil bacteria that inhibit the growth of the weed’s deep root system, its competitive advantage, even as those bacteria leave native plants untouched. 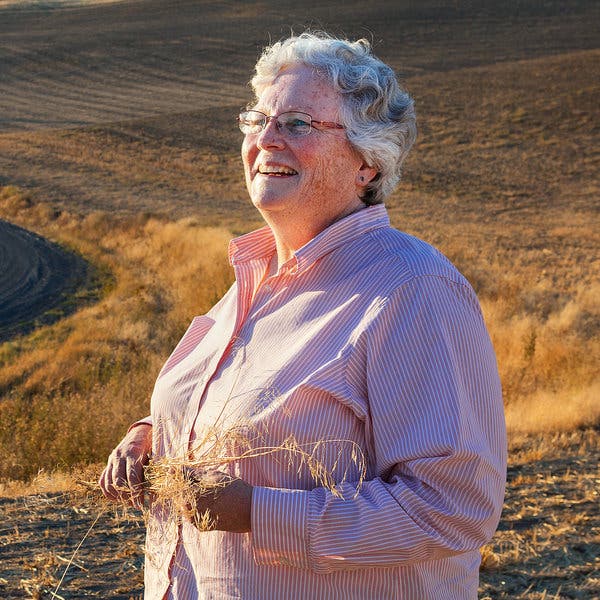 Dr. Kennedy’s hunt for a cheatgrass killer has been nearly 30 years in the making. In 1986, she was investigating yellowed wheat in the Palouse country of eastern Washington State when she found some bacteria that appeared to inhibit the number of shoots that the wheat sent skyward, but not the wheat plant’s overall yield; the plant just made bigger kernels. Dr. Kennedy wondered if a bacterium could be used to frustrate weeds instead.

With help from undergraduates at Washington State University, where she is an adjunct professor, Dr. Kennedy tested 25,000 bacteria she took from nearby farm fields. Her goal was to find ones that satisfied a wish list of ideal attributes such as hindering cheatgrass while not affecting wheat. She likened the search to picky online dating.

The researcher finally settled on two strains of Pseudomonas fluorescens, a huge species of bacteria that is present throughout the natural world. Most of its strains perform beneficial functions in the environment.

In long-term field trials around the inland Pacific Northwest, including Hanford Reach National Monument in Washington State, Dr. Kennedy’s bacteria reduced the amount of cheatgrass in test plots by about half within three years of a single application.

“We get it down to near zero weeds within about five or six years,” Dr. Kennedy said, as other plants recover and grow more competitive. The bacteria also dispatch two other invasive plants, medusahead and jointed goatgrass. The latest findings will be published within the next year, she said.

July 15, 2015
These bacteria work differently than quick-killing herbicides, she said. Once a concentrated solution is sprayed on the land, successive generations of the organisms establish themselves in the soil, then colonize the roots of the cheatgrass.

Cheatgrass’s chief advantage is its roots: They can grow more than 30 inches deep. They grow later into the fall and earlier in the spring than those of native plants, monopolizing the soil’s water and nutrients. The bacteria produce a compound that inhibits normal root growth, however, removing this edge.

The bacteria are living, and if not applied under the right conditions, they “can croak,” said Jerry Benson, the owner and manager of BFI Native Seeds in Moses Lake, Wash., a habitat restoration firm that is working on protocols for applying the bacteria.

One of Dr. Kennedy’s strains has already been approved for use by the Environmental Protection Agency; a commercial product is expected to be released in the fall of 2016. Dr. Kennedy has even higher hopes for a second strain, now in the approval process.

Sept. 16, 2015
Interest is high because the need is urgent. Earlier this year, Interior Secretary Sally Jewell ordered a new strategy to address the wildfires — fueled by cheatgrass — that are torching huge parts of the West’s sagebrush landscapes. The resulting losses of habitat were a big reason the greater sage grouse was considered for the endangered species list. (The federal government declined to list the bird last month, citing new recovery plans by state and federal agencies.)

Dr. Kennedy acknowledges that her discovery isn’t a silver bullet. Though whipping up the bacteria “is like brewing beer,” she said, spraying 100 million acres of the West would be prohibitively expensive. What’s more, the cheatgrass could eventually return.

Instead, she and others envision tanker aircraft, like those that dump water on wildfires, treating miles of fire breaks with the bacteria, to clear them of the weed and slow the spread of fires.

Professor Bradley, of the University of Massachusetts, Amherst, whose models show that cheatgrass could advance into northern Wyoming and eastern Montana because of climate change, said Dr. Kennedy’s bacteria also might help hold the line.

Asked if she worries that she might be replacing one problem with another by spreading these bacteria, Dr. Kennedy replied: “It’s in our soils. It’s just not in high enough numbers to do the job.” The bacteria naturally die after four years, she added.

Dr. Kennedy said that over the years she and colleagues selected for use only the strains that had entirely benign traits, screening them for their harmlessness on more than 250 grass plants in addition to insects, birds and rats.

She believes she has found solutions to other weed woes beneath our feet, too. “Really, there is a beauty to soil,” she said. “It’s just absolutely a wonder world of activity. You just have to go in search of it.”

A version of this article appears in print on October 5, 2015, on Page D2 of the New York edition with the headline: A Way to Cut a Weedy Bully Down to Size.